There is one common problem which I deal with on a daily basis and one which is often termed ‘Sciatica.’ Piriformis syndrome is common in a lot of lower back complaints as well as hip complaints and seems to have quite an integral role in a number of other complaints. If the problem is muscle related then the good news is that this can be treated by Remedial/Sports massage Therapy. In the following article I will show evidence as to its authenticity, symptoms , why it occurs and what can be done to remedy the problem.

The following quote is from the Daily Mail, April 5th 2005.

‘Doctors who have used a new nerve scanning test (MRN – Magnetic Resonance Neurography) found that in many patients , the sciatica was not caused by a damaged disc in the back as is usually assumed, but by a trapped nerve in the pelvis.

Sciatica is when the sciatic nerve in the lower back is pinched or irritated, causing lower back pain which travels down into the foot. A damaged disc in the lower back has been widely accepted as the most common cause of sciatica and diagnosis usually follows a physical examination and a scan.
But as well as damaged discs, sciatica can be caused by piriformis muscle problems, where a narrow muscle deep in the buttocks irritates or pinches the sciatic nerve.’ 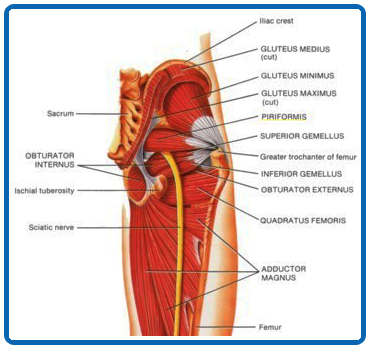 With the piriformis having its origin at the internal front part of the sacrum and then attaching to top of the femur/leg (see picture below), you can see what an important and active role this muscle plays in the movement of your hip and appreciate how much work it actually does on a daily basis, from getting out of the car to swimming (breast stroke) and football this muscle is heavily utilised. 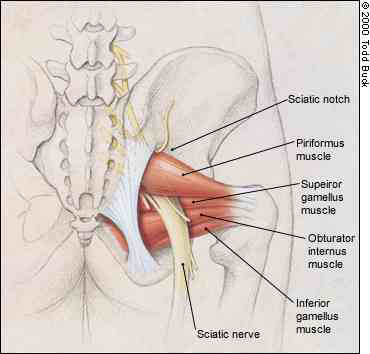 When this muscle becomes chronically tight/ hypertonic it can squeeze on the sciatic nerve causing ‘piriformis syndrome’, which starts with a pain which begins in the buttocks and can send a shooting pain down to the knee and referred pain to the lower back via the sciatic nerve.

The following quote is from the Daily Mail, April 5th 2005.

‘In a study at the Cedars-Sinai institute for spinal disorders in the U.S.A to see whether MRN could spot the cause of sciatica, doctors carried out tests on 239 patients whose symptoms had not improved after diagnosis or treatment for damaged discs. Using MRN the researchers found that 69% of the patients had ‘piriformis syndrome’, while the remainder had other nerve, muscle or joint conditions not picked up by standard scans.’

If this area is tight other nerves become tight as a result and it’s these other nerves which can send pain into the upper region of the buttocks as shown in the picture below. 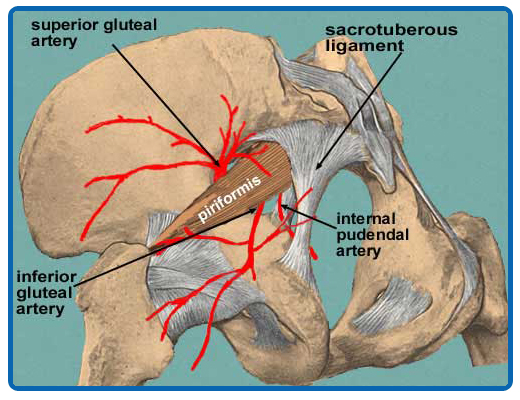 You can see here how the nerves spread around the buttock region and if the piriformis becomes tight for whatever reason then this can though not always send referred pain to other regions in the buttocks.

With Remedial/Sports Massage therapy it is possible to detect if ‘piriformis syndrome’ is the one of the causes or the main cause of lower back pain by testing in the following manner.

Examination findings may include the following:

If it turns out to be a case of ‘piriformis syndrome’ which doesn’t require surgical treatment (which really is a last resort as this usually means there has been quite a substantial tear) then it this problem can be eased and in quite a number of cases eradicated altogether using conservative treatment (e.g., stretching, manual techniques, injections, activity modifications, modalities like heat or ultrasound, natural healing) is successful in most cases, especially if the patient also adheres to a regular stretches provided which greatly reduced the chance of the problem reoccurring.

The way in which I treat the problem and one which so far has produced a lot of positive results is simply using manual muscle medicine. This includes positional release and other similar techniques which have proved very effective in releasing the muscle tension and so easing the pain. I will point out that this method can be a little uncomfortable at first but does get easier, even during the first session.

As with most things the prognosis depends upon early recognition and treatment. As this is a soft tissue syndrome, it has a tendency to be chronic, usually due to late diagnosis and treatment and has a less favourable prognosis, so if you suspect a problem the quicker you act the more effective any treatment will be.

As mentioned earlier for conservative measures to be effective, you must carry out a home-based stretching program to maintain piriformis muscle flexibility. This program must be carried out even beyond the point of discontinuation of formal medical treatment.

If you feel that you may share some of the symptoms described in this article and want to discuss this further with me, please do not hesitate to give me a call or write to me via info@massagehands.co.uk